This forum is for reporting any bugs or issues you may encounter with the House Party Story Creator. Please refrain from posting any suggestions or discussions about the Creator itself and keep this forum populated with only bugs or issues.
Forum rules
Forum rules
No racism, sexism, anti-semitism, brigading, doxxing, or ANY form of abusive behavior. No discussion of hacking or piracy or the buying, trading, or selling of ANY type of product or service (digital or otherwise). No advertising of any product or service (digital or otherwise, and this includes streams or any service involving 'subscribers'). No discussion of religion or politics. Do not link to other adult sites, with the exception being discussion of other adult games in Offtopic/allowed subforums; i.e. no pornography.

We will use username, e-mail, AND IP bans without reservation, and mods hold the final word in such decisions.
Post Reply
8 posts • Page 1 of 1

I'm new to the CSC, but since I'm a little addicted now I've spent like 48 hours last week (holidays yay..) fooling around with it.
Now I got the issue that Leah still got all the menu items I gave her (Story-->Characters-->Leah), but they didn't fire anymore.
I went through my latest changes and put some periodically events that might create the problem to never, but nothing worked.

I started throwing away all the events in the event trigger one by one (and restarting game after every remove), but still the problem existed.
Then I duplicated my original again, threw away the entire event trigger and manually recreated it from my original.
And then Leah started working again. It is exactly the same, same name, same events, same criteria, but probably underneath a different event trigger id and that's how the problem got fixed.

I am a C#.Net developer in my daily job, now this sounds to me like a 'clean solution and rebuild entire solution' to me.
Duplicating a story doesn't generate new id's apparently, it just copies the corrupt situation.
I'm not a unity developer, but is there an equivalent of completly cleaning the solution? Exporting the story apparently doesn't fully rebuild all.


I hope above makes any sense.

More to say: it would be great if generics got implemented where you could use input variables.
So eg. I want a character to dress something like this would be possible.
Call EventTrigger_StripCharacter(string playername)


Probably not the first requesting these sort of changes.
And if it is already there, point me to it 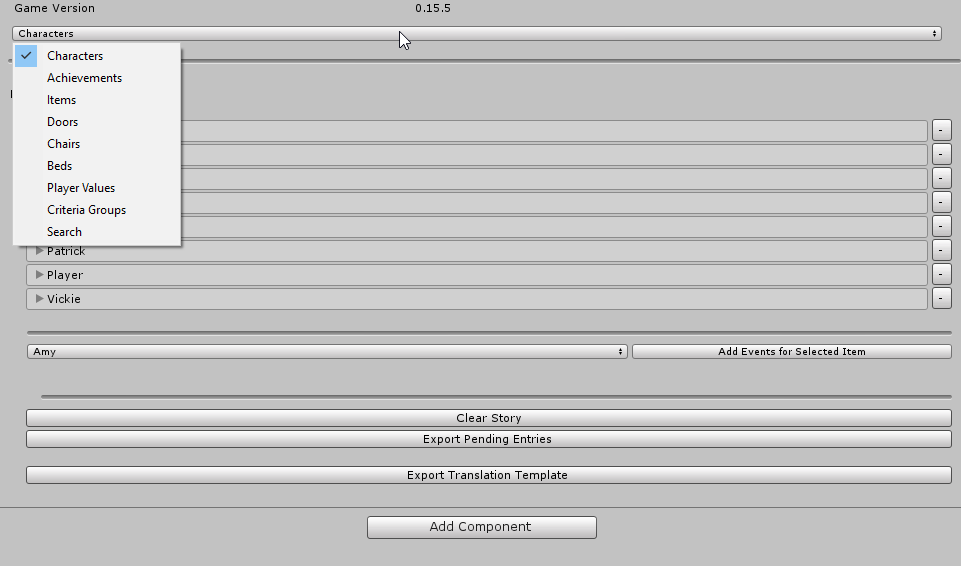 I had the same issue with an item interaction of Leah.
She didn't react on the Fifty dollars when all criteria were in place, checked them with 'list values Leah' and 'list quest Frank' (Frank holds the quest in progress).

I dropped the item interaction trigger and recreated it and it worked again.

Is Leah unstable or am I doing something wrong?
Top

Here is a workaround that seems to fix these corrupt events.

I tend to use DisplayMessage for debugging purposes to see if a certain event got hit.
I got the Fifty Dollar problem again, and when I added the displaymessage to the event, it started working again.

Meanwhile, this gives me a bad feeling how to know all my event are still triggered without testing the entire walkthrough over and over again.

Edit: for now all my problems seem to be with Leah.
Top

I removed the original quest and recreated it.
I replaced all the old quest start and end triggers with the new one. Exported, tested again.. not working.
(BTW: when deleting a quest, the trigger jump to the first one alphabetically, that could really mess up my story. I'd prefer a ' Quest not found ' error instead)

I renamed the quest, just to make sure the key wasn't bound to the name,.. not working.

I repeated the whole proces, creating a new one, with a new name directly.

Of course, I could edit the JSON file and import the story to CSC again, but I'm starting to worry if something is wrong with my setup now.
It clearly -randomly- ignores to write changes to the JSON file on export.

I did have Frank targetting a player. I recreated the event.
The problem here is a dialog that starts the quest holds the old id reference.
Deleting the event and adding it again, doesn't change a bit.

Any workarounds except changing the JSON manually?

Sorry for posting 3 different problems in one topic, but for me they're all the same: things that were working break randomly and changes don't update in JSON correctly.

Edit: the thing that worked was throwing away the response and recreating it, but again.. the problem is you only notice these broken references by testing the story by playing it. Since some quests are followups deeper in my story that's frustrating, even though I use savegames on certain points to test scenario's.

Edit 2: apparantly saved games (or game sessions?) cache the reference too. I had to restart houseparty and start a new game to have it working again. I hope the next version of CSC has some way to search broken references. Tempting to make on on the JSON files. The Quests are in the file with their ID's,so if a dialog or event trigger uses a non existing it would be possible to get them.

Just need a bit to read through this. Don't worry, you're not alone

Do you have an exported story example you could share? And to be clear, we're talking about item interactions not firing? How exactly did this all start? Before trying to duplicating stories, etc.
Erasmus
Eek! Games LLC
Vice President, QA & UX
Top

I'll try to replicate this situation, but I think it has something to do with this topic:
viewtopic.php?f=10&t=1074

When you mess it up like that without noticing and then try to fix things by dropping quest and re-adding, it doesn't update the referenced ID's when you alter the dialog's and such to see the new quest.Instead of solving the real problem, you're causing more.

I do have a backup of the situation that has the Leah not talking scenario described in the first post. I'll retest if the problem is in there first.
I had this in there:

The workaround you describe in that post:
"If you need to make a new ReachTarget event trigger, start off by selecting a Character, then swap the Option/type over to MoveTarget. That error in the CSC exists now to alert users of a data mismatch in case they make a mistake, but the presence of the error itself shouldn't affect the story once exported."

works fine now. I mainly use it on MoveTargets that direct to items.

But for people like me who start fooling around and when they bump into trouble start reading.. it got me frustrated when everything appears to be fine and it doesn't work.

Keep up the good work, fun to play with.
Top

Yeah...we don't change quests in the stories that are out in retail; I wouldn't have noticed any annoyances there. It's been awhile since I had the time to really play around in the CSC for the sake of seeing another perspective or for fun. It sounds like you figured it all out, correct me if I'm wrong. Sorry it was confusing at first; we're still working on the tool and hopefully once we're closed to exiting Early Access I can get some semblance of real documentation up...other than amateurishly concocted tutorials of course

I back-up often. Between Unity being...not perfect, total size/scope of all the included stories, "data visibility issues" (akin to what you have probably experienced) and ongoing back-end development, etc., I've got 349 backups of the 0.16.x story files locally and remotely stored. It's a disease at this point. Send help.

Otherwise, glad you're enjoying it