The prior post is correct. The Enters Zone event will fire before the Character's CurrentZone is set to that zone.

does not hit though.

I'm coming from downstairs, so I'm not in zone already.

I dropped all my other criteria even though they were true after checking them with 'list values'.
The event trigger is hosted under the Frank character.

Even this new story with only one event (on Amy) for entering hte master bedroom doesn't trigger when you walk into the masterbedroom. 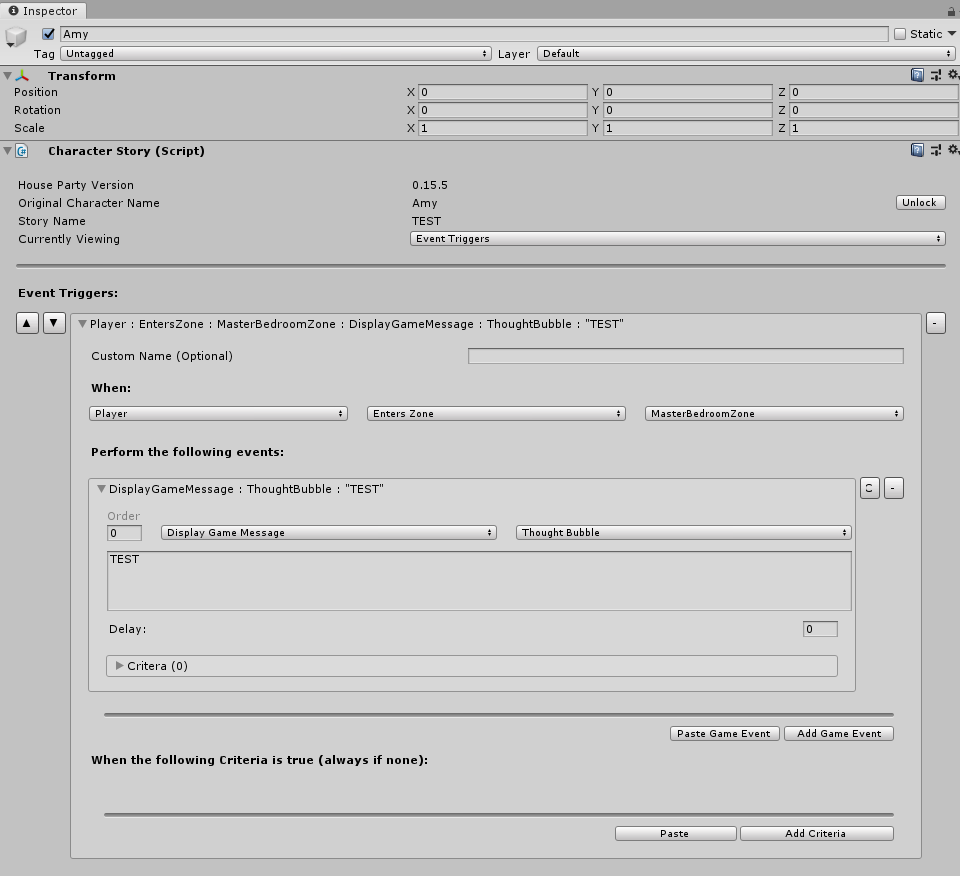 There was an issue with this in the last update. It'll be fixed in the next: 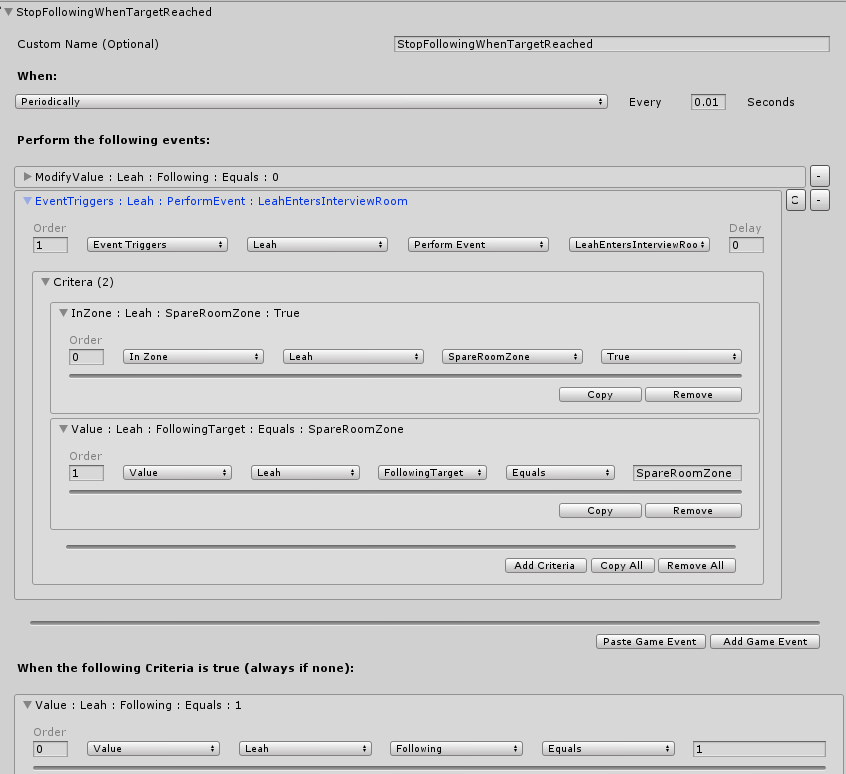 Talking about periodically. Do the use of too many of those give performance issues? Or are you checking criteria first before you trigger them anyway?
So like the gamecode only tries out the periodic triggers that have met the criteria at some point?

Lets say <character> runs into the Kitchen. None of the above hits, but all 3 still check in your gamecode?

So once <character> runs into the Kitchen, it grabs all event triggers (and the periodic ones) that hit the criteria ' <character> in zone Kitchen' (zero in my example) or does it test all 3 in my example every second?
Or in case when <character> enters the garage, does it only test the one with the ' <character> inzone Garage' ? This sounds more healthy to me.

Just wondering how your code behind is working with those periodic triggers from a developer' s point of view. Probably the criteria first and then the periods if criteria met, the other way around might give problems when I use too many of them in my story. (Considering what is too many). Probably you meet the criteria first, just curious.

I like those to give the story a little randomness though.

I hope this makes any sense..
Top

So in short, the fastest periodics should have to be is about 0.3s. It can be faster, but you won't gain anything. Notice the time delta on this periodic, which I set at 0.1s in the CSC: 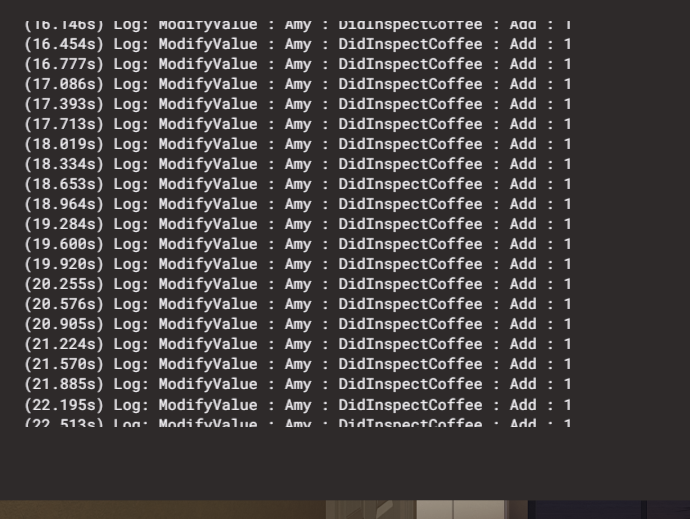 Not firing every 0.1s. So, don't bother with anything faster than 0.3s. Again this only applies to game events that are queued (won't be getting into that whole system here, but it's safe to assume a fair amount are), and periodic event triggers. The actual *contents* of the event (like setting an NPC to state immobile = true) are generally instant or near-instant. As instant as your PC can get

Once these event "contents" fire, they're effectively ready to use in an event that is fired next OR perhaps more accurately stated: is next in the event queue. Even an event that is within the same periodic and merely one "Order" value higher (yes, Order matters other than OCD organization).

As for performance, there could be an affect with many periodics running at once. Especially if they display messages on-screen or aggressively handle character animation(s) or movement, or cause physics fun to happen. Things could also get choppy if you're handling large arrays of criteria at once and firing off many simple game events; but the threshold for for that is still higher than if you're trying to fire off momentum itemfunctions or something like that every 0.3s. Even if you have four events, one at 0.01s, 0.1s, 0.2s, and 0.3s as shown below, they'll only process at the rate of the Character Update tick rate, so you would have to try pretty hard to impact anyone with a relatively modern PC:

If you're concerned about it, set ALL of your periodic event triggers to false at the beginning of a story, set them to true when you are sure you'll need them soon or imminently, disable them when they'll definitely not be used again, AND criteria-lock them. If a periodic is not enabled, none of its criteria are evaluated and nothing inside it is evaluated or will have a chance at firing.

In Fiery Date story, I experimented with having 3 events, where each would call one of the others 50% of time after some delay. Which is kinda like periodic events, but it's not.

And before I added some safeguards, those events could get out of sync, when they would start calling each other more and more often, leading to killing performance. We are talking about events being fired in hundreds or thousands of times in second.

This is only time in the game I got into situation where event systems reduced performance.

But personally, I would recommend not too quick perfiodics or anything that would make debug logs unusable.
Top
Post Reply
16 posts