This forum is for posting any bugs you find with the House Party game. Please do not ask for help with the game in this forum. Use the main House Party forum for that. Only post things that you feel are a problem with the programming or the game not doing what it is supposed to.
Forum rules
No racism, sexism, anti-semitism, brigading, doxxing, or ANY form of abusive behavior. No discussion of hacking or piracy or the buying, trading, or selling of ANY type of product or service (digital or otherwise). No advertising of any product or service (digital or otherwise, and this includes streams or any service involving 'subscribers'). No discussion of religion or politics. Do not link to other adult sites, with the exception being discussion of other adult games in Offtopic/allowed subforums; i.e. no pornography.

We will use username, e-mail, AND IP bans without reservation, and mods hold the final word in such decisions.
Post Reply
5 posts • Page 1 of 1

Here are some things I encountered in playing through the new Leah content (which is hilarious, by the way).

1. Once, in the garage, when Leah asked me to throw some punches, she happened to be standing right in the garage door. Hitting her a couple of times made her back up. Then, getting closer to her to throw the next punch resulted in her chastising me for "running away," perhaps because I had to leave the garage to get close enough to hit her. It also meant I failed the training, so I had to reload.

2. After Leah finds the sword, you can just tell her there's an assassin after her, instead of taking the sword to investigate further. This results in her keeping it. But later, lurking in the bushes she asks for the sword back, even though she's still holding it. Doesn't break anything, but it seems weird for her to ask for something that's already in her hand (picture attached).

3. When Leah asks you to hunt down Frank, if you refuse, there's a thought bubble that says "Not smart, not smart" and Leah rushes toward you. I'm assuming she's supposed to attack you, but she never does. She just follows you around, running. You can find Frank the first time, but then you can't climb the gutter to his second hiding place because "imminent death is following," further implying Leah's supposed to be attacking you. Furthermore, if you start punching stalker Leah, every punch brings up the "Whoa, whoa, our sparring session ended in the garage" dialogue. Which really slows down the fight...

4. If you choose Frank's side in the final confrontation and try to fight Leah, you also get that dialogue with every punch. Which makes it impossible to fight her (not that I would expect to win, of course), since you're clicking on a dialogue response while she's punching away.

5. During the hunt for Frank, Leah sometimes ends up carrying the spray paint can around, along with the snake, which I don't think is intended. This one might have resulted after saving and reloading.

6. Also, saving and loading at the final confrontation with Frank (which I had to do a lot, obviously, 'cause I'm bad at fighting), results in Leah losing her spray paint skin and not being in her correct snake handling pose (picture attached). 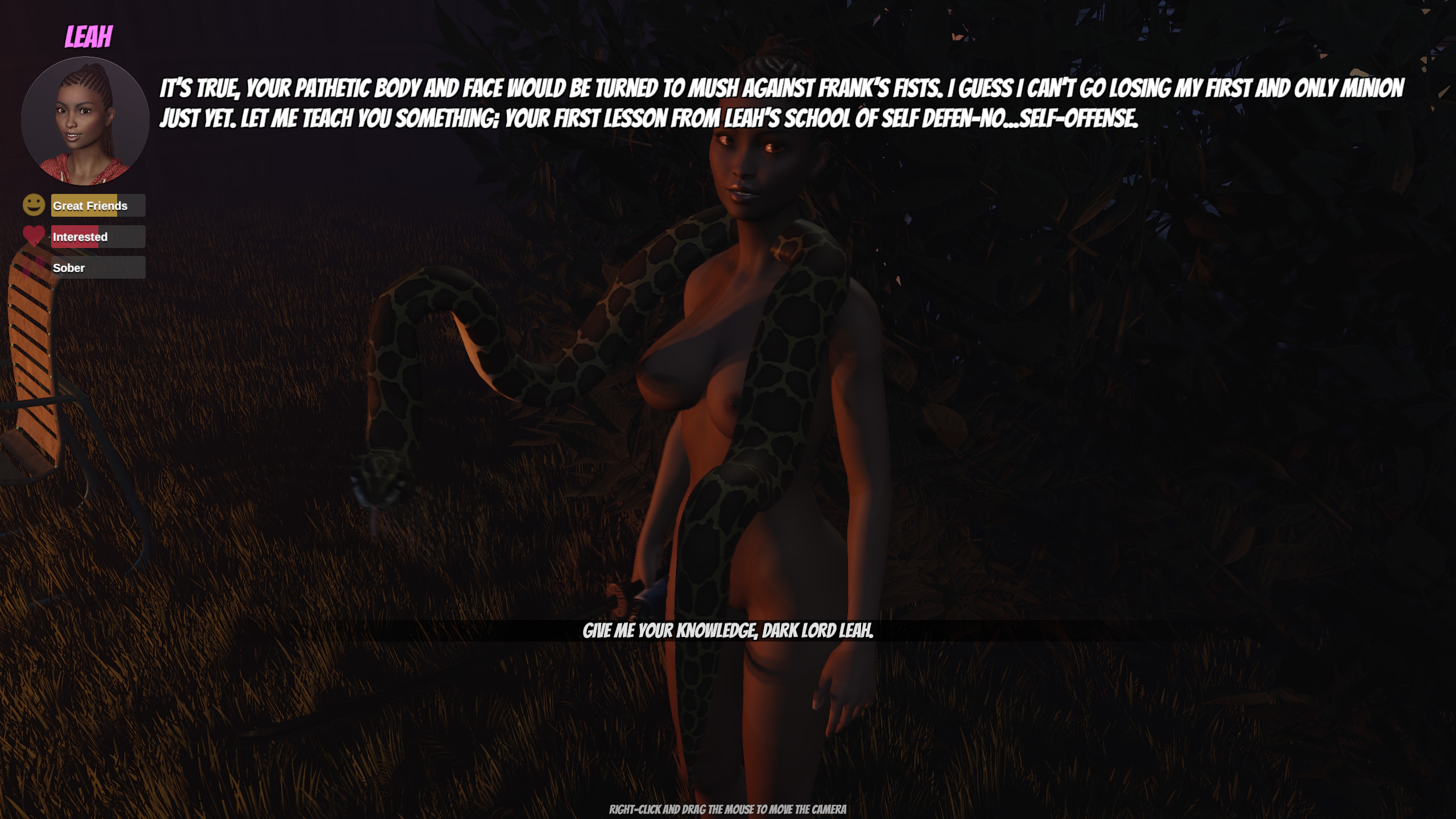 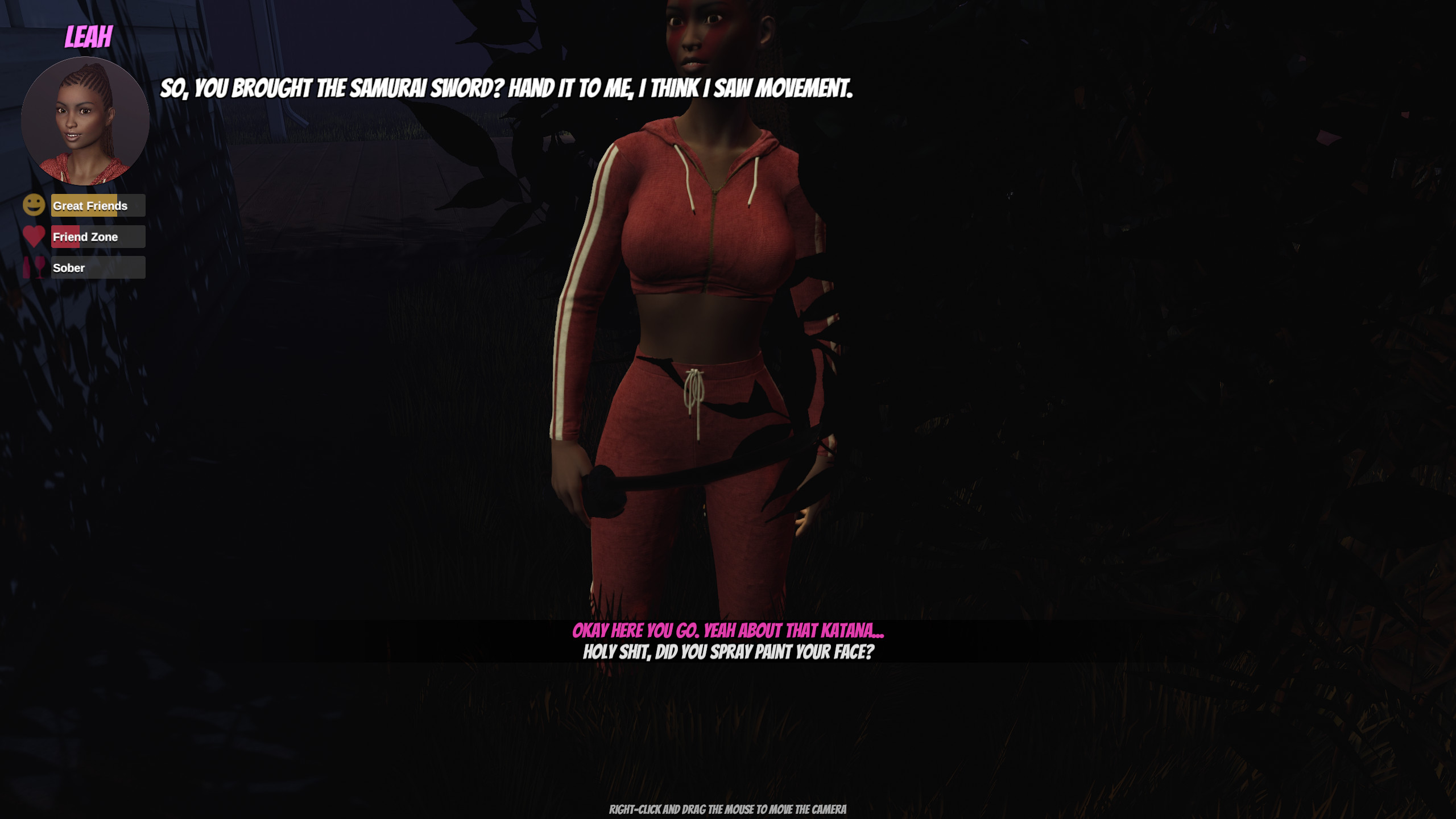 Great thank you. I'll take a look. Been meaning to fix the more aesthetic ones (mounted items, etc.) for a couple days and I still have yet to go through save/load issues.
Erasmus
Eek! Games LLC
Vice President, QA & UX
Top

Could I ask for a hint on where to get started with the Leah content? Is it around her old content in the garage?
Top

Key hint in progressing is getting close to Ashley.

It's actually multiple paths to Ashley that lead to discovering Leah content.
Top

Nice, Ashley's probably my favorite character, so i'm stoked for more Ashley content (even if she's 2nd fiddle to Leah in this update).
Top
Post Reply
5 posts • Page 1 of 1